Cuba | Tips on where to eat and drink in Havana 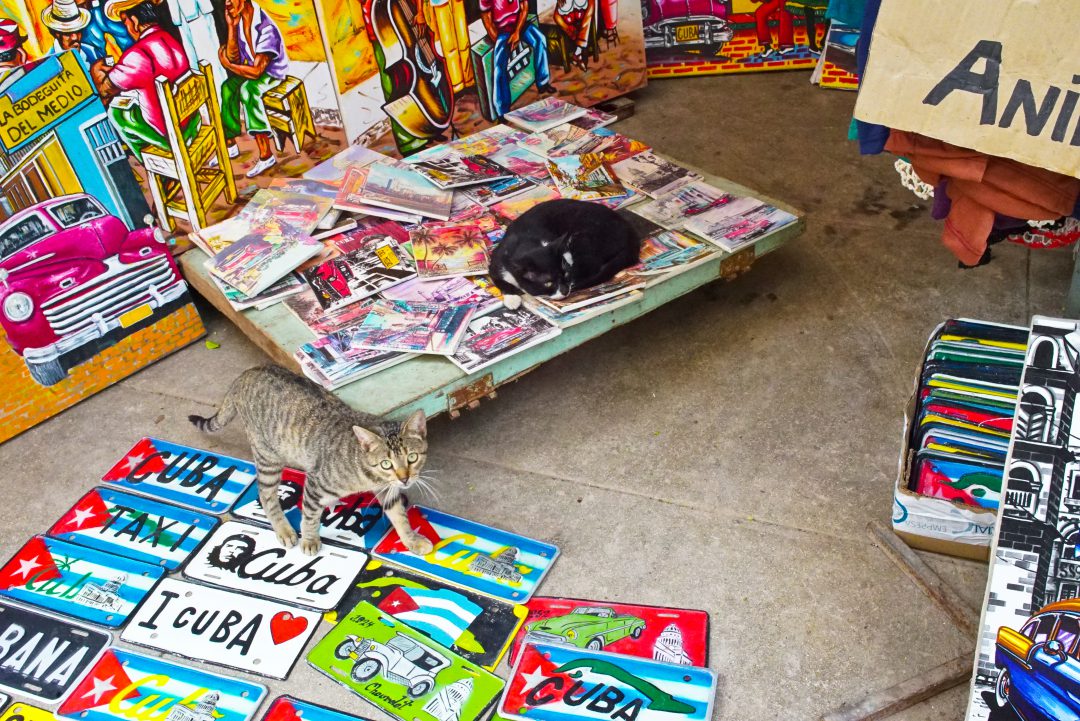 ‘Lobster every day!’ Nick could not stop saying that. And indeed, he had lobster every day while we visited Havana. Now, Cuba is not known for being a foodie destination. For those who have seen the film ‘Chef’ and think you can have Cuban sandwiches on every corner, think again. However! We did have some awesome food during our stay. Now that Cuba is opening up, the door is also open for more food experimenting. Here are some tips if you’re heading that way.

Santy Pescador
We loved this place. Idyllically located in a small harbor, surrounded by little fishing boats the place just breaths ‘holiday’. Santy Pescador, as the name reveals is all about seafood and they do that well. There is no menu but expect to be treated to some sushi and in our case  we had some tasty batches of squid and prawns after. It’s a bit difficult to find, there are no signs and you have to knock on a door and be buzzed it. But don’t give up and keep asking for directions. It is more than worth it. 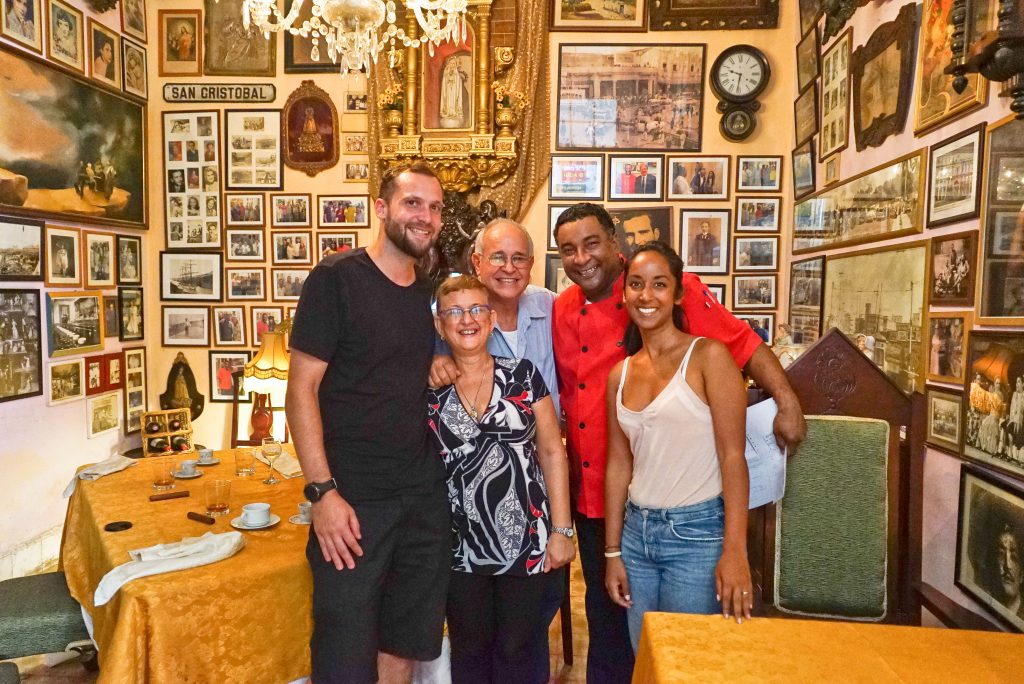 This is us with Mauricio, Sara and chef and owner Carlos Cristóbal Márquez

San Cristóbal
Eating at the same place as Barack Obama and Beyonce did? Yes please. We went here with Mauricio and Sara with whom we were staying with in Havana. They do all sorts of lovely food here. Nick and I were feeling adventurous and had a pineapple filled with lobster. But most great about this place is the quirky interior. It’s like eating in a kitsch antique shop.

Mojito Mojito
We stumbled upon this place when were drawn to music coming out and decided to have lunch here. The food here is solid. Again, lots of fish, good sized portions and great music.

Nick’s thoughts on drinking and eating in Havana: To be honest you don’t need to plan too much. Just wander round the streets, keeping your eyes and ears open. There are so many fun and quirky little bars to drop into, grab a drink and enjoy the vibe of this amazing city. 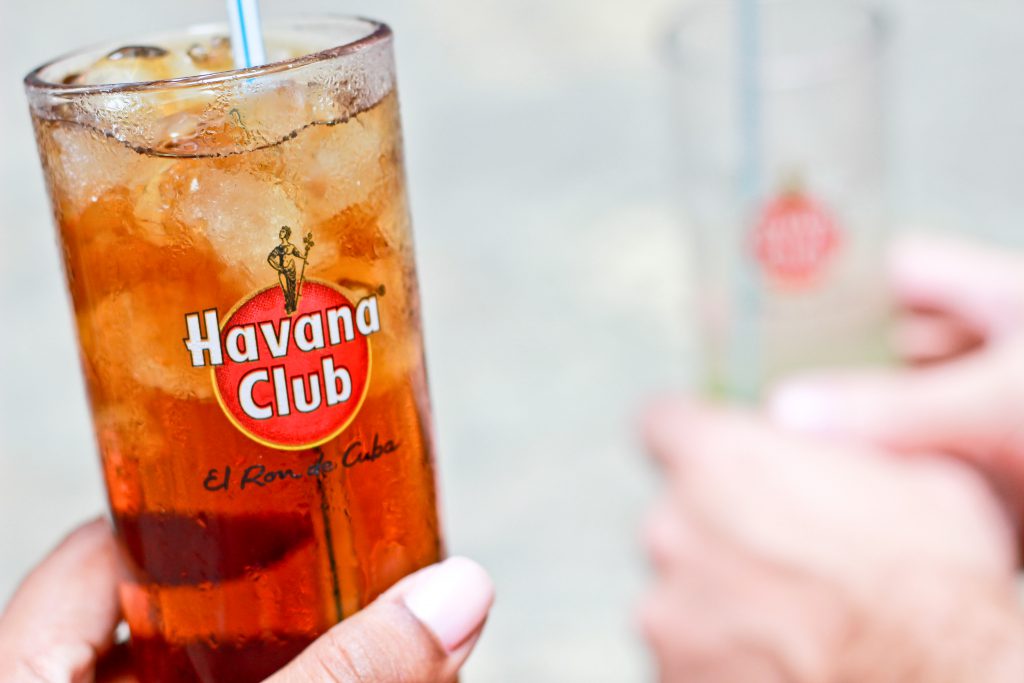 El Cocinero
You can find this hip gem outside the old city in the neighborhood of Miramar where there is loads to explore when it comes to eating and drinking. You can’t really miss the place since it is set in an old smokestack that was used to be the offices of the tramway in Havana. The food here is contemporary. Nick had an excellent lobster tail while I went for the fish of the day. Tip: We had a spot on the roof terrace, bring something warm to wear since it cools off at night here.

La Fábrica de Arte Cubano (FAC)
Right next to El Cocinero, this place combines art, live music and clubbing. It is a terrific place to have good time and dance the night away in one of the many halls of this maze of a building. Now pay attention for this next bit! The queues here can be quite intense because of its popularity. Outside are people that will approach you offering to get you straight in for anywhere between 20 and 30 dollars. This is NOT a scam. We did it. And got in. It’s a bit cheeky but if you don’t want to stand in line for literally three hours then go for it. You basically borrow a club-membership card to get in. Nick said it was the best 20 dollars he’d ever spent.

Fun Fact: The Cuban sandwich was the common lunch for factory workers. Since many factories moved from Cuba to the Key West so did the sandwich where it continued to evolve and later became a hit in Miami too. This inventive take on a ham/ roasted pork and cheese sandwich, toasted with pickles and mustard has become more and more popular since the movie ‘Chef’.

La Casa del Son
When in Rome… But we weren’t in Rome. We were in Havana and when you’re in Havana you do some salsa. So I had a lesson and then another one because I liked so much. And even Nick got persuaded (not by me) to take a lesson. We have video, yet I was not allowed to share it. 🙂

La Zorra y el Cuervo
This is the perfect romantic spot if you are looking for one. You can’t miss it as you enter through an old British red phone box. This jazz cafe is exactly how you would picture it. It is underground, dark, has small tables and live music and is intensely atmospheric.

We went to Colombia too! Check out our tips on eating and drinking in Bogota and Cartagena.